Position Statement: What Is Currently Happening to Fukushima Children?


Consideration of thyroid disorders, pulmonary function, bone marrow function based on the studies from the Chernobyl nuclear accident, etc.

(1) Thyroid cysts found in 35% of Fukushima children examined with an average age of 10.

Thyroid examinations of Fukushima children have been implemented as part of the “Fukushima Prefecture Health Management Survey” to monitor the health effects of the Fukushima Daiichi Nuclear Power Plant nuclear accident.  The results of the thyroid examinations released on April 26, 2012 are summarized here.

【The official document in Japanese may be downloaded from the following link.】
http://www.pref.fukushima.jp/imu/kenkoukanri/240426shiryou.pdf

The implementation status of the examinations and the summary of the results are shown in the above document, the sixth report of Fukushima Prefecture Health Management Survey.

(Translator note: As of the date of translation in late July, 2012, the seventh report was available, which covered further analysis of the same data from the sixth report.  For a complete description of the thyroid examination and analysis of data from both reports in English, please refer to this article. http://fukushimavoice-eng.blogspot.com/2012/07/thyroid-examination-by-fukushima.html)

Age distribution of the children who received thyroid examinations (average age of 10 in 4th or 5th grades), follow.

Actual examination findings are evidenced in the chart below.
“Nodules” comprised 1% and “cysts” 35.1%.

In regards to Fukushima thyroid examinations including children from babies and infants up to high school students, I would like to discuss the prevalence of “cysts” detected by thyroid ultrasound examinations in comparison to the research result reported in the past.

【This paper may be downloaded from the following link】
http://1am.sakura.ne.jp/Nuclear/kou131attach2.pdf

Nagasaki University’s study in 2006, co-authored by the current Fukushima University Medical School vice president Shunichi Yamashita, examined 250 children in Nagasaki prefecture with ultrasound.  Two children (0.8%) were found to have thyroid cysts.  (Cited in second paragraph on page 593 of the above study.)

(3) There are few incidences of thyroid nodules or cysts at birth.  Thyroid abnormalities begin to gradually increase past age 5.  By age 20, one in ten has thyroid nodules and/or cysts.  (Study by Mazafferri in New England Journal of Medicine.) http://1am.sakura.ne.jp/Nuclear/kou131attach3.pdf

The study published in 1993 (Mazzarerri EL, et al. Management of a solitary thyroid nodule. N Engl J Med 1993 Feb 25;328(8):553-9.) examined mostly Americans with ultrasound examinations and autopsy/biopsy.  The study revealed that few thyroid “nodules” (The study defined both tumors and cysts as nodules.) were found at birth.  Incidence began to gradually increase past the age of five, proportionate with age, with one in ten having thyroid nodules and/or cysts by age 20.  (The graph below has been compiled from Figure 1 in this study:  ● represents the prevalence of thyroid nodules detected at autopsy or by ultrasound.  □ represents the prevalence of thyroid nodules detected by palpation.)  In addition, the study stated that 25-35% of the “nodules” were “cysts.’ 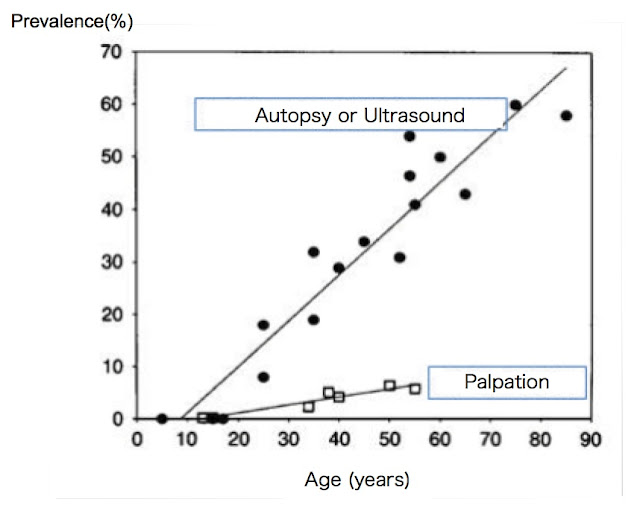 Prevalence of Palpable Thyroid Nodules Detected at Autopsy or by Ultrasound (●) or by Palpation (□) in Subjects without Radiation Exposure or Known Thyroid Disease.

(4) Prevalence of thyroid cysts in Chernobyl children under the age of 18 was 0.5%.
(The Nippon Foundation study)

【The above article may be downloaded from the following link】
http://nippon.zaidan.info/seikabutsu/1999/00198/contents/012.htm

From 5 to 10 years after the Chernobyl accident, Shunichi Yamashita, the vice president of Fukushima University Medical School, conducted ultrasound thyroid examinations in a total of 160,000 children in Gomel and surrounding areas with marked radioactive contamination.  In this study, “nodules” and “cysts” were recorded separately: “nodules” mean solid tumors.  The results show that cysts were seen in 0.5% and also “nodules (solid tumors)” were seen in 0.5%.  Below is Figure 11 from this study, seen in above URL. 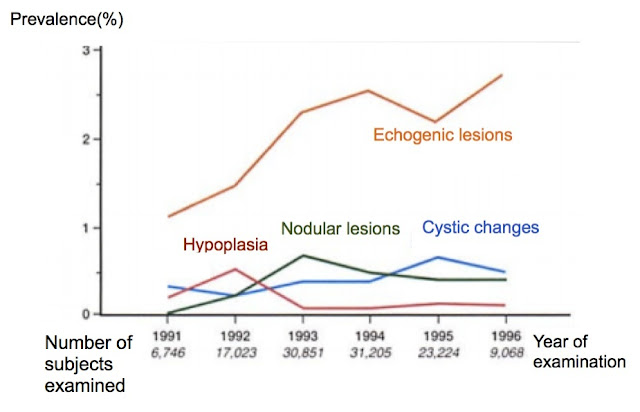 Figure 11. Dynamics of prevalence of abnormal findings by thyroid ultrasound examinations (1991-1996).
(5) Prevalence of thyroid “cysts” in Fukushima children is higher than in any other studies.

When the above four studies are tallied in one table, it becomes obvious that the result of the thyroid examinations of children in the “Fukushima Prefecture Health Management Survey” is astonishing.  This is because one-third of the children had developed “ cysts.” A “cyst” is a fluid-filled sac.  Cysts don’t mean there is an immediate chance of developing thyroid cancer.  However, it is apparent that something extraordinary is happening inside the thyroid gland, such as inflammation or changes in cellular properties.

Sevendsen et al, from the Department of Epidemiology and Biostatistics, University of South Carolina, demonstrated in 2010 that children who had been living in areas heavily contaminated with radioactive cesium have decreased pulmonary function.

【This article may be downloaded from the following link】
http://www.ncbi.nlm.nih.gov/pmc/articles/PMC2866691/?tool=pubmed

Normally pulmonary function peaks around age 20, and from then on, FEV1 decreases by 20-30 cc per year.

A decrease of FEV1 by 150cc means either an early aging of lungs or a failure of pulmonary maturity by 5-7 years.

Children who continuously live in areas of Ukraine with 355 kBq/㎡ soil contamination will have pulmonary function aging five years faster than those living in uncontaminated areas. 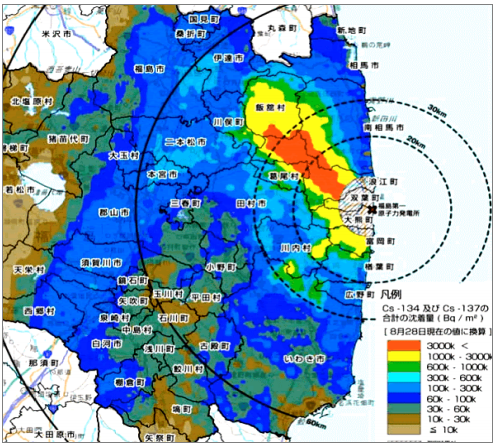 This is a soil contamination distribution map created by the Ministry of Education, Culture, Sports, Science and Technology last year and depicts the total soil concentration of Cs-134 and Cs-137(Bq/m2) calculated to the value estimated for August 28, 2011.

Deep blue ■ indicates a soil contamination level of 60-100 kBq/㎡, framing the hillsides of Nakadori: this is comparable to the “low contamination area” in the Sevedsen study.

Therefore, children currently living in Hamadori (coastal region) and Nakadori (adjacent to the coastal region) are at risk of accelerated pulmonary aging by several years.

Furthermore, this study underestimates the effect of radiation exposure by using the control group in low contamination areas in comparison.  We must therefore be prepared to face much greater health damage in reality.

The next study to be presented exhibits data about hematopoietic dysfunction due to radiation exposure in children who kept living in highly contaminated areas leading to leukopenia and anemia.  This is a 2008 study published in Environmental Health by Dr. Stepanova from Scientific Center for Radiation Medicine, Academy of Medical Sciences of Ukraine.  It’s a follow-up study of blood counts in 1,251 children living in Narodichesky region, Zhitomir Oblast, Ukraine from 7 to 11 years after the accident.

【This article may be downloaded from the following link】
http://www.ncbi.nlm.nih.gov/pmc/articles/PMC2459146/

Stepanova et al. Exposure from the Chernobyl accident had adverse effects on erythrocytes, leukocytes, and, platelets in children in the Narodichesky region, Ukraine: A 6-year follow-up study. Environ Health. 2008; 7: 21-.

Therefore, what we need to medically assume from this study is that there is a possibility that hematopoietic function of the bone marrow might be suppressed for a long time in children who are currently living in Hamadori and Nakadori of Fukushima.  Leukopenia reduces body’s resistance against bacteria and viruses.  Low red blood cell count can cause anemia more easily.  Low platelet count interferes with blood coagulation when hemorrhaging from injuries.

Moreover, we must take into consideration that, if there are any children with illnesses or disabilities currently living in Fukushima Nakadori and Hamadori, this degree of effect on bone marrow function might exacerbate their existing conditions.

Furthermore, this study underestimates the effect of radiation exposure by using the control group in low contamination areas as comparison.  Therefor, we must be prepared to face much greater health damage in reality