Curious Remarks About “Whole Genome Analysis” Made by Goshi Hosono, Minister of Environment

Recently there was an NHK (Nippon Hoso Kyokai) news story on the NHK World website regarding the announcement made by Goshi Hosono, Minister of Environment, for “genetic studies” to be conducted in Fukushima.  (NHK, or Japan Broadcasting Association, is Japan's national public broadcasting television station.)

Curiously, this news story was deleted from the NHK World site after only two days.  NHK websites do not maintain archives of news stories for some reason, but the deletion after two days seemed like an exceptional decision.

For reference, NHK also has a track record of maintaining a “double standard” for domestic and international coverage of the same news story.  For instance, NHK was very slow at broadcasting anti-nuclear demonstrations preceding the July restart of Oi nuclear power plant.  Initially, they simply did not cover the story.  Eventually they did a 27-second segment of the onsite demonstration the day before Oi restart in NHK World.  However, the domestic coverage was a cursory mention that a demonstration happened (as in past tense) but the restart was to happen as scheduled.

In this case, however, the original Japanese news story and the English version were not too far off, except the Japanese version was more detailed.  Please compare the two versions below, followed by the screenshots of both.

The Japanese government plans to study the possible effects of radiation on genes of people affected by the Fukushima nuclear accident. It will begin the tests in the next fiscal year.

Environment minister Goshi Hosono revealed the plan at a meeting in Fukushima City on Thursday.

Fukushima residents have been voicing concerns over possible genetic effects of radioactive substances emitted in the nuclear accident at the Fukushima Daiichi nuclear power plant in March last year.

The ministry plans to conduct blood and other tests. The ministry says it will work with the Fukushima Medical University and research institutions. The first priority will be testing children.

Hosono said after the meeting that the health of Fukushima residents needs to be monitored for more than 50 years. He said understanding radiation influences on the genetic level could help these people in the future.

The ministry plans to request funding to carry out the study in its budget for the next fiscal year.

Ministry of Environment has decided on a policy to begin studying the effects of radiation on human genes in people who were affected by TEPCO Fukushima Dai-ichi nuclear power plant accident.  The study will begin in the next fiscal year.

The plan was revealed by Minister of Environment, Goshi Hosono, at a meeting held in Fukushima-city in the evening of August 30th.

For this reason, Ministry of Environment has decided on a policy to study, beginning in the next fiscal year, the possible effects of radiation on human genes by collecting blood samples from those who wish to be tested among the residents who were affected by the nuclear accident.

He said they have not decided when the study would begin or who would be included in the study.  However, Ministry of Environment will cooperate with Fukushima Medical University and other research institutions to conduct the study, giving priorities to children.

After the meeting, Minister of Environment Hosono stated, “Fukushima residents’ health will need to be monitored not just 5 to 10 years, but for over half a century from now on.  I think understanding the effect (of radiation) on the gene level will prepare us for the future.”

Ministry of Environment plans on including the cost of the study in the request for budgetary appropriations for the next fiscal year. 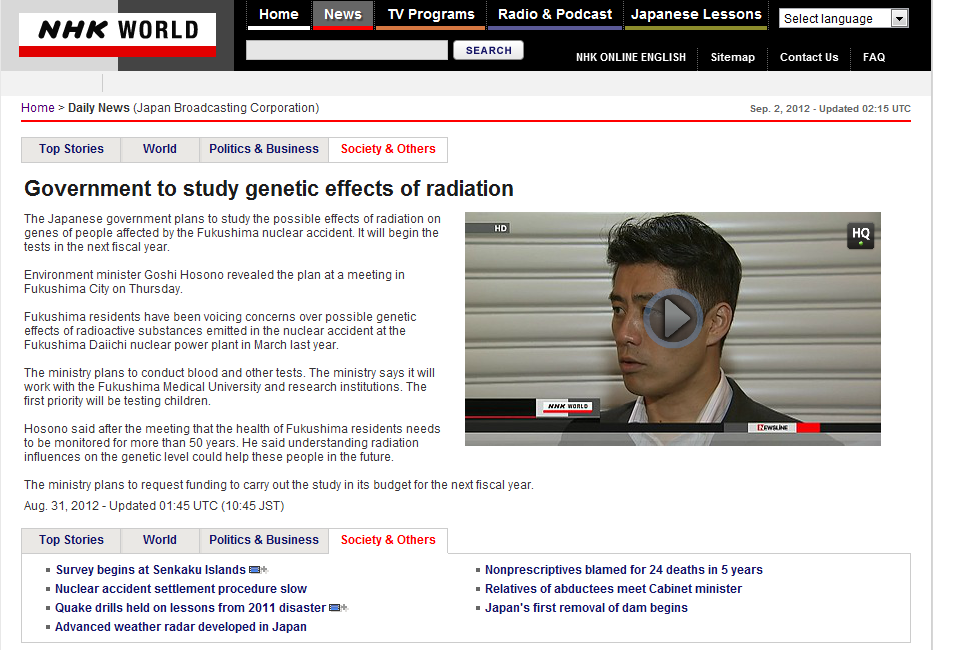 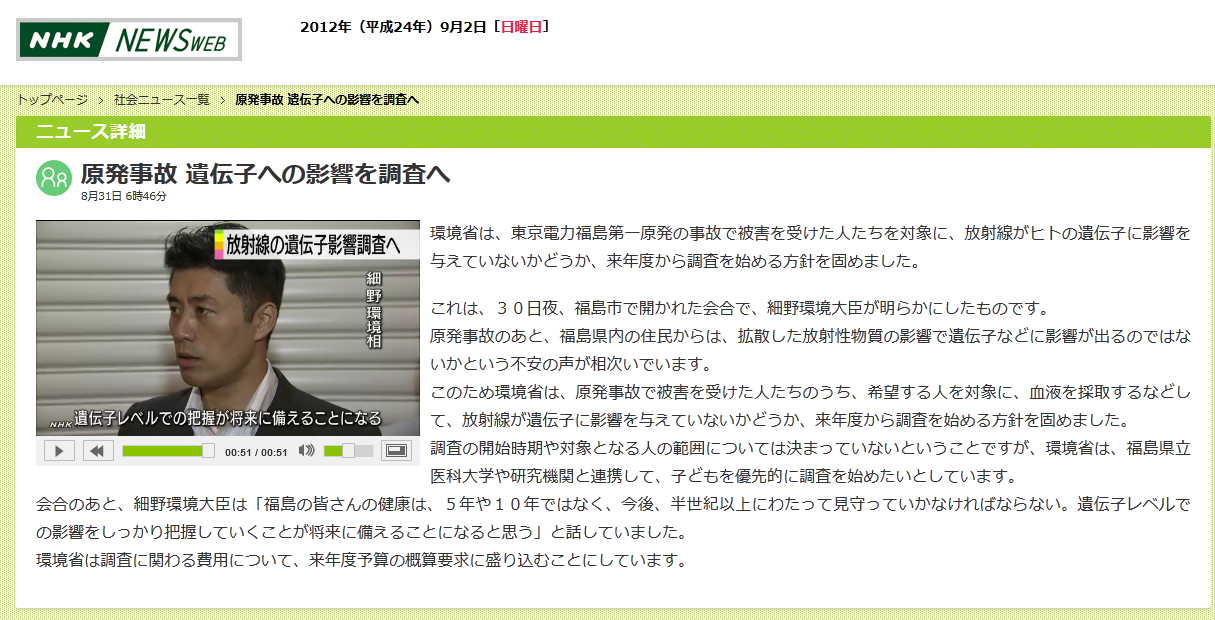 Curiously, though, a Sankei News website story, published six hours before the original NHK story, at 00:35 am on August 31, 2012, has a slightly different take on the news.

English translation and the screenshot of the news story to follow.

Ministry of Environment, Goshi Hosono, revealed on August 30, 2012, that the government would begin a “whole genome (genetic information) analysis study” on Fukushima residents, in the next fiscal year, in order to investigate the effects of radiation exposure on genes from the TEPCO Fukushima Dai-ichi nuclear power plant accident.  He told the press corps after a private round-table conference at Fukushima Medical University in Fukushima-city.

Ministry of Environment Hosono said, “The government intends to squarely face (issues in) Fukushima.  A study on genes might not immediately resolve anxiety (of residents), but an investigation of fundamental genes in humans would lead to future prevention.”  MInistry of Environment will primarily study children.

Ministry of Environment Hosono revealed a plan to include 6.1 billion yen (about $80 million) in the request for budgetary appropriations for the next fiscal year for a new center planned by Fukushima Medical University.  The new center will become a hub for perinatal and pediatric medical care, in addition to Fukushima Prefecture Health Management Survey and radiation researches. 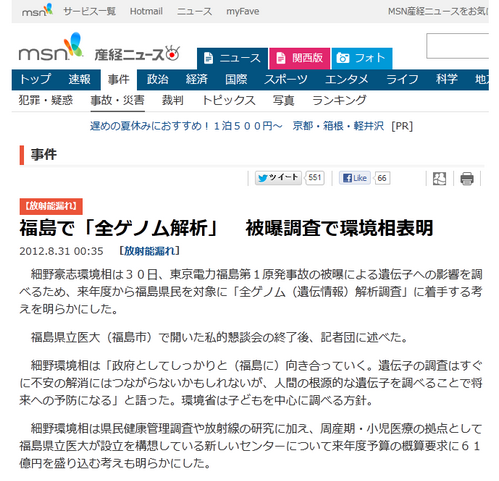 The Sankei story strikingly differs from the NHK stories in the use of the term, “whole genome analysis.”  However, their use of the term in the headline suggests that the term was actually used by Minister Hosono.

On the video in the NHK news story, Minister Hosono says, “Health of Fukushima residents will have to be monitored by us, not just for 5 to 10 years, but for over half a century.  I think a clear understanding on the gene level will prepare us for the future.”

What was it that he said prior to this statement referring to genes?  What does he mean by “prepare for the future”?

It is a well-known fact that it is not “whole genome analysis” but a chromosomal aberration  study that can be used as an objective and sensitive index of radiation exposure.

Chromosomal aberrations have been studied since the atomic bombs in Hiroshima and Nagasaki.

Cytogenetic Study of the Offspring of Atomic Bomb Survivors, Hiroshima and Nagasaki
http://www.nap.edu/openbook.php?record_id=1800&page=344

Chromosomal aberrations were also studied after the Chernobyl nuclear accident.

Chromosomal aberrations and sickness rates in Chernobyl clean-up workers in the years following the accident
http://www.ncbi.nlm.nih.gov/pubmed/20065691

The Hiroshima International Council for Health Care of the Radiation-exposed (HICARE) has a publication called “Genbaku Hoshasen no Jintai Eikyou 1992 (Effects of A-bomb Radiation on the Human Body) --Digest Edition--.”
http://www.hicare.jp/en/13/hi01.html

On page 20, it states, “A strong correlation exists between aberration frequency and distance from the hypocenter, and hence with radiation dose” and “In follow-up studies, chromosomal aberrations in the bone marrow act as an important indicator for the development of various hematopoietic disorders (particularly leukemia).”

Japanese researchers have known, from the human effects of the atomic bomb, that chromosomal aberrations are correlated with radiation exposure dose and act as an important index for radiation exposure.  Despite this existing knowledge, even at 18 months after the Fukushima accident, the government has not only failed to initiate chromosomal aberration studies but insists on “whole genome analysis.”

Dr. Alexey Yablokov, a Russian biologist and ecologist and one of the authors of ”Chernobyl: Consequences of the Catastrophe for People and the Environment,” made the following statement upon hearing the news of impending “whole genome analysis” in Japan.

Genetic studies for chromosomal aberrations were started several months after the Chernobyl accident by researchers at the Institute of General Genetics of USSR Academy of Science in Moscow.  All liquidators were examined at the initial study.  Several months later, multiple genetic institutes from Minsk and Kiev joined and examined the evacuees and later thousands of inhabitants in all contaminated territories.  Hundreds of scientific papers have been published as a result of these genetic studies.”

What needs to happen in Japan is NOT to use Fukushima children exposed to radiation for an "experiment" named "whole genome analysis," but an immediate evacuation of those children from contaminated areas.

Instead of “calculating estimated exposure doses” from theoretical yet uncertain factors, such as where they were, how long they were there, what they ate, etc., we need to determine “actual damages” the body sustained from radiation exposure.  This could include baseline studies including blood tests, thyroid ultrasound examination and EKG,  urine testing for radioactive material, whole body counter testing, chromosomal aberration studies known to correlate with radiation exposure dose from the atomic bomb research, and observation of lens opacity in the eyes known to correlate with radiation exposure dose from the Chernobyl research.  These studies could be used to assess the current condition of these children (and adults) and to monitor them.  (Dr. Yablokov also suggests the following:  tooth enamel EPR or Electron Paramagnetic Resonance dosimetry; and monitoring changes in buccal epithelium, which is being done in Bryansk, the most polluted area in Russia after Chernobyl.)

Rather than simply conducting follow-up studies for the purpose of gaining data for epidemiological researches to publish, at a later date, “what the occurrence of a certain cancer was,” we need to take care of the children.  We need to thoughtfully and thoroughly help them lead comfortable, happy lives, after they were “forced to sustain radiation exposure,” by closely monitoring their health conditions so that any signs of illness can be caught early for appropriate and swift medical managements.

Children are a nation’s treasure.  Without taking care of our children, our nation will not survive.  When will they realize that?