This video shows a demonstration by the people of Iwaishima, a small island off the western end of Honshu, in the Inland Sea, against a proposed Kaminoseki nuclear power plant 4 km across the water.

Iwaishima was featured in a 2009 documentary film, “Ashes to Honey: The search for energy independence, in Sweden and Japan.” by a filmmaker, Hitomi Kamanaka. http://888earth.net/en/introduction.html

The Iwaishima People’s Association holds an anti-nuclear demonstration every Monday afternoon which reached a total of 1,100 times on June 20, 2011. 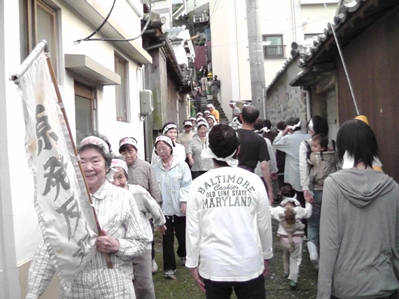 Iwaishima’s demonstrators are 80% women, as the demonstration was originally started by the Iwaishima women.

The flag held by a person walking at the head of the procession, stating “We oppose a nuclear power plant (原発反対)” is the one that has been used from the very beginning.

Initially there were a lot of issues: the police would not readily process the request, and the person who went to the police station on the mainland Honshu would waste a whole day of work.

Recently, there are different issues such as a change of demonstration route due to the aging of the participants and cancellation due to bad weather, but we were able to continue it as sort of a weekly town meeting. 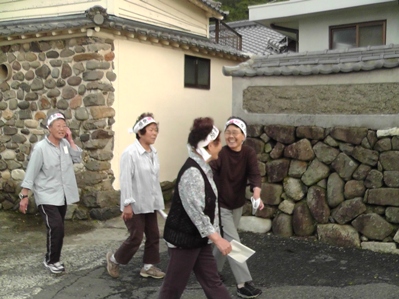 Certainly 1,100 is a big number, but it’s nothing to be happy about.

Strength of the Iwaishima women who were able to keep laughing as they marched on despite such hardships is one of the reasons Iwaishima has been able to continue to oppose a nuclear power plant for nearly 30 years.

Since 1982, the people of Iwaishima have led a determined and patient campaign demonstrating
their objection to the construction of the nuclear power plant. Iwaishima is a small island just 4
km from Tanoura. It is an island of breathtaking natural beauty and its 500 inhabitants continue
a traditional, sustainable lifestyle of fishing and farming that has existed for countless
generations. But this way of life will be destroyed if the construction of the nuclear power plant
goes ahead. The local ecosystem will be disturbed, perhaps irrevocably, and the inhabitants will
no longer be able to live off the area’s fresh fish and rich harvest. Though they have been offered
sizeable financial inducements to accept the project in the form of indemnity, the people of
Iwaishima have expressed their overwhelming preference for a traditional life of sustainable
development. The Iwaishima people have rejected the offer of a lifestyle of financial enrichment
brought about through simultaneous environmental impoverishment.

Also worthy of mention is the Iwaishima “Kan-Mai” festival, which has been in existence since
the Heian era in 886. The people of Iwaishima proudly continue to celebrate their historical and
cultural heritage in a festival that has been held for over 1,100 years.