The Tenth Report of Fukushima Prefecture Health Management Survey was released on February 13, 2013.

The Radiation Medical Science Center of Fukushima Medical University now has an English site where they have complete, official translation of the previous survey results.
http://www.fmu.ac.jp/radiationhealth/results/

However, the newly released result has not been officially translated yet.  Excerpts of the new thyroid examination result are translated into English in this article.  In addition, some critical information from the February 13, 2013 Committee meeting is included.

The thyroid examination section of the survey is shown in this link.
www.pref.fukushima.jp/imu/kenkoukanri/250213siryou2.pdf (Japanese)

The Fukushima Prefecture Health Management Survey Planning Committee revealed that 10 of 186 eligible for the secondary examination from FYH23 were suspected of having thyroid cancer as a result of the examination.  They reported that three of them were confirmed to have papillary carcinoma of thyroid gland and already had surgery.  The remaining seven have 80% chance of having cancer based on their biopsy results.  These children’s identities were not revealed, including their estimated thyroid exposure dose and place of residence, citing protection of their privacy.

The ten children included 3 boys and 7 girls, and their average age was 15.  The average size of their tumor was 15 mm.

The three children who already had surgery include a female child between age 16 and 18 who had a C assessment in the last result, as publicized in mid-November 2012.  They are all apparently doing well after surgery, being followed on an outpatient basis at this time.


The percentage of abnormalities from FYH24 at 44.2% is higher than previous results of 42.7% and 43.1%, and the overall abnormality rate, for FYH23 and FYH24 combined, of 41.8% is higher than the last result of 40%.  The proportion of children with nodules equal to and larger than 5.1 mm and any size cysts have increased.

For a complete, official English translation of the thyroid examination section of the Eighth Report of Fukushima Prefecture Health Management Survey, please refer to this link.
www.fmu.ac.jp/radiationhealth/results/media/2_Thyroid_Ultrasound_Examination.pdf

For a complete, official translation of the thyroid examination section of the Ninth Report of Fukushima Prefecture Health Management Survey, please refer to this link.
www.fmu.ac.jp/radiationhealth/results/media/9-2_Thyroid.pdf 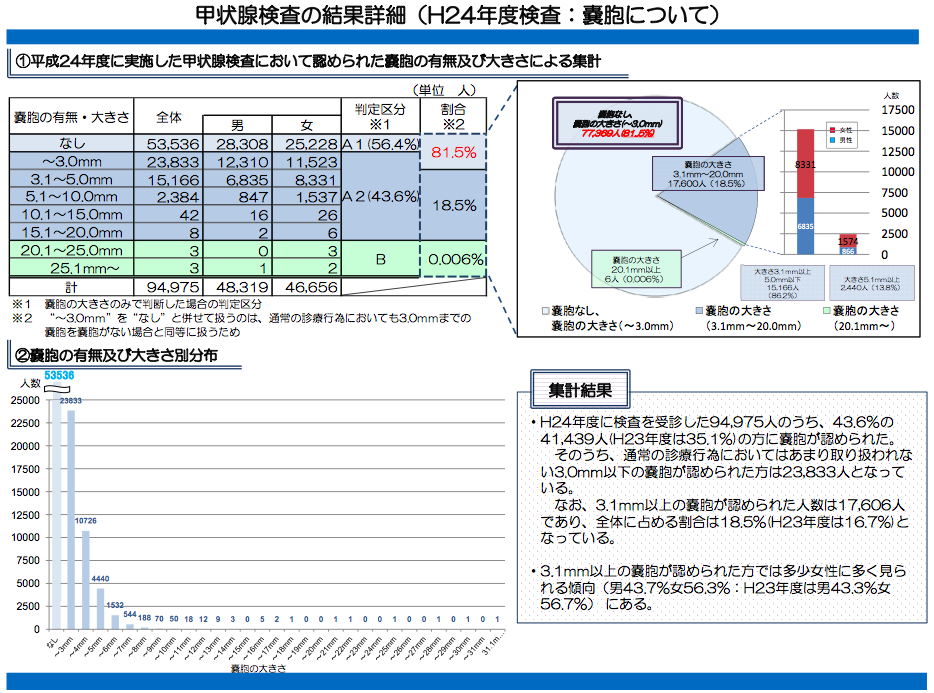 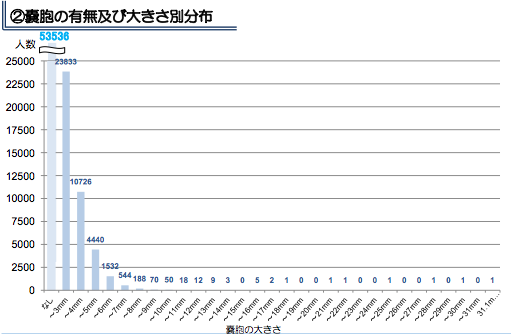 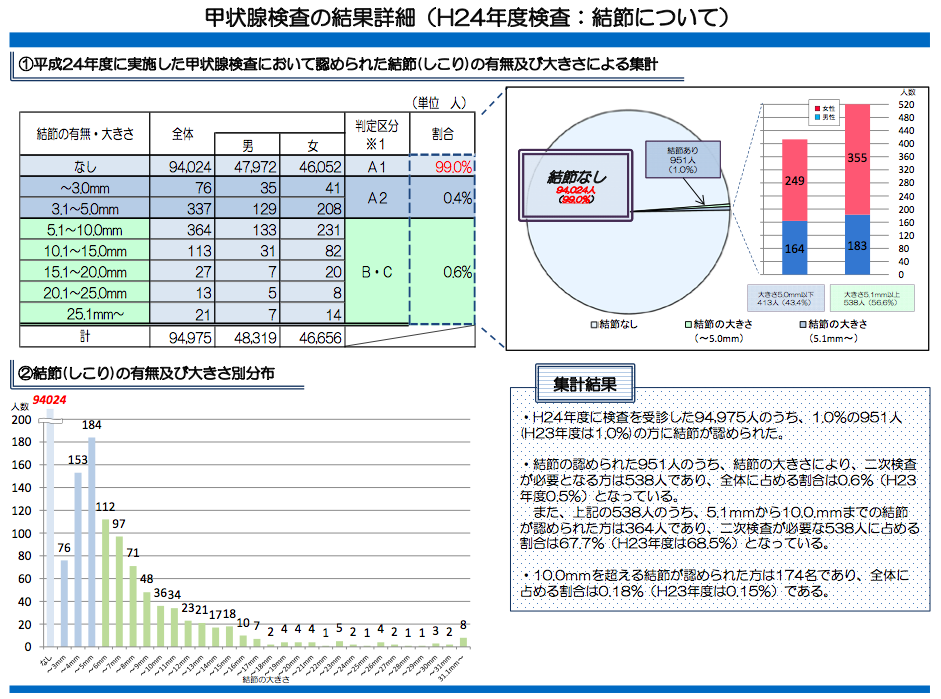 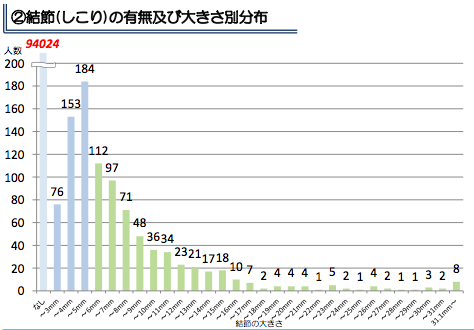 FYH23 examination: 186 qualified.
151 finished and 76 had biopsy.
10 had suspicion of thyroid cancer.
3 were confirmed to have papillary thyroid cancer and had surgery.

FYH24 examination: 549 qualified with 200+ more anticipated.
Currently being conducted.
9 had biopsy, but results not released yet. 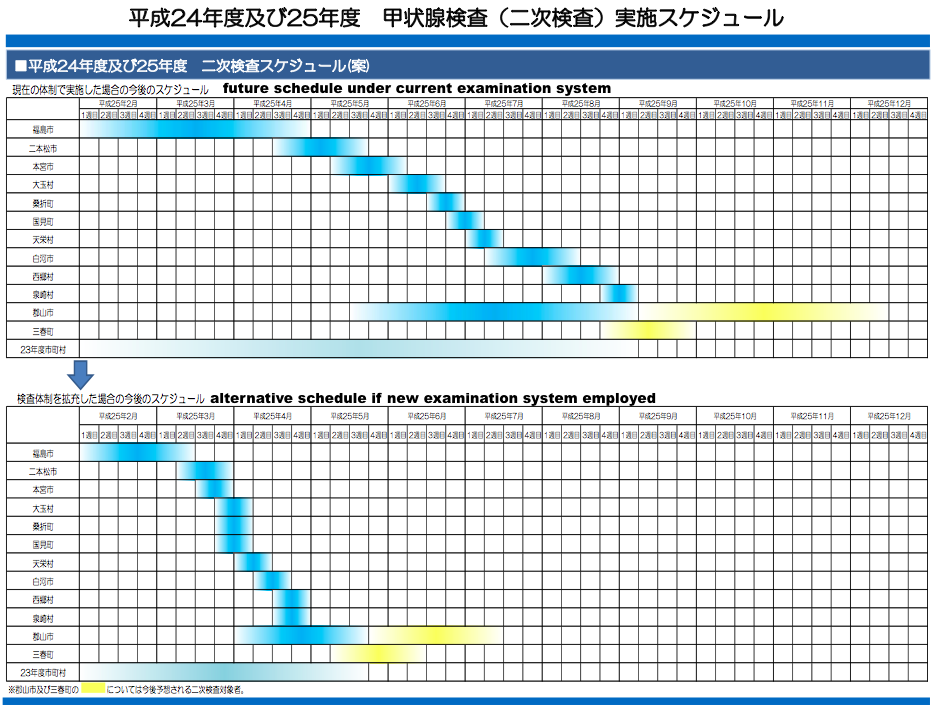 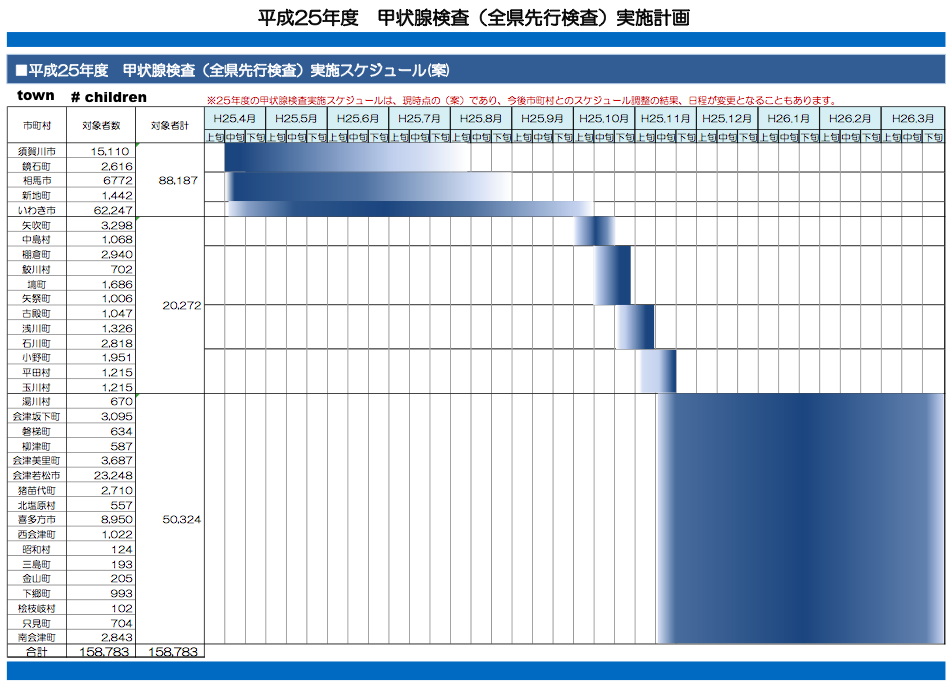