The Ninth Report of Fukushima Prefecture Health Management Survey was released on November 18, 2012.

The thyroid examination section of the survey is shown in this link.
http://www.pref.fukushima.jp/imu/kenkoukanri/241118koujyousen.pdf

Most significantly, there was a child, a female in the 16 to 18 age group, with a C assessment in the new results, requiring an immediate secondary examination.  This was the first time there was a C assessment.

Even though the percentage of abnormalities from FYH24 at 42.7% was slightly less than the previous report at 43.1%, the overall abnormalities remain essentially the same at 40%.  Moreover, there are higher proportions of nodules over 10.1 mm than the increase in the total number of children examined.  As before, a higher proportion of abnormalities was seen in female children in all age groups in the A2 assessment and in age groups older than 6 in the B assessment.

Moreover, as of November 1, 2012, the thyroid examination began at facilities outside Fukushima Prefecture for those children who have evacuated Fukushima.

For an excerpted English translation of the thyroid examination section of the Eighth Report of Fukushima Prefecture Health Management Survey, please refer to this link.
http://fukushimavoice-eng.blogspot.com/2012/09/fukushima-thyroid-examination-part-2.html 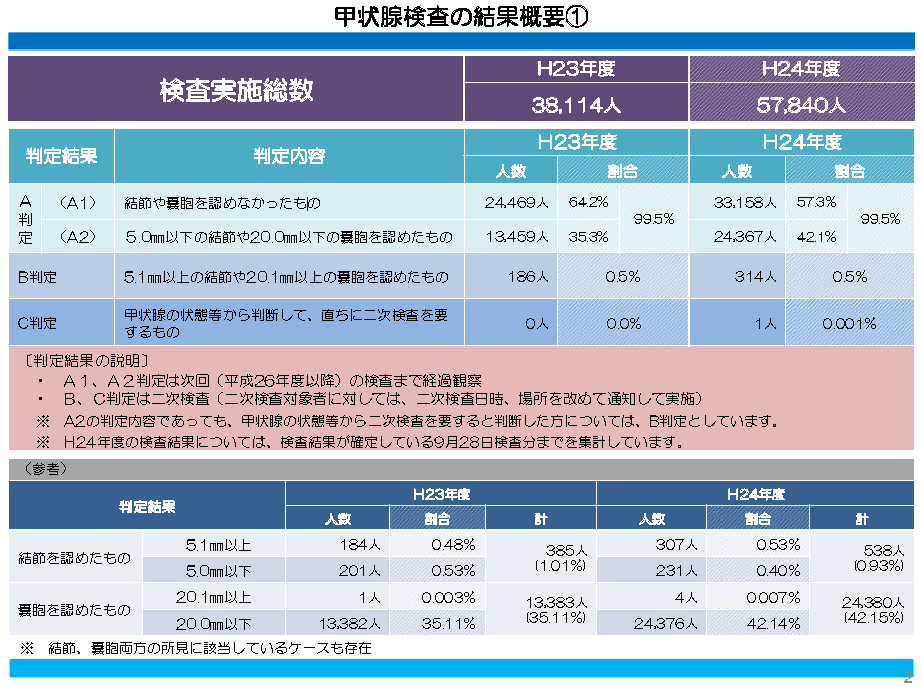 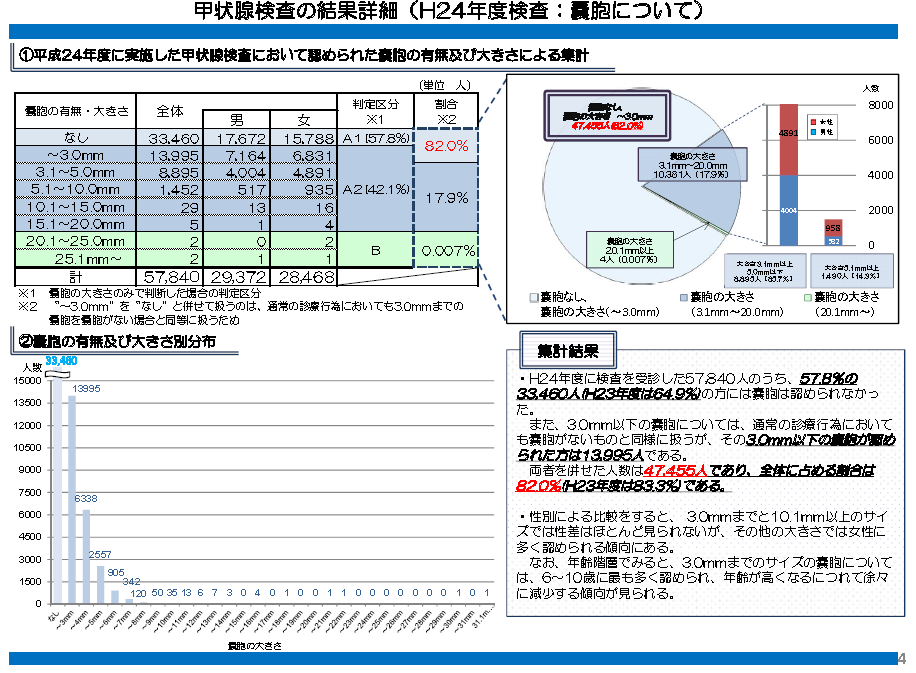 ※1 Assessment classification based on the size of the cysts alone.
※2 The reason the size group “～3.0 mm” is put together with “No cysts present” in the proportion is because in ordinary medical examination cysts smaller than 3.0 mm are treated as no cysts. 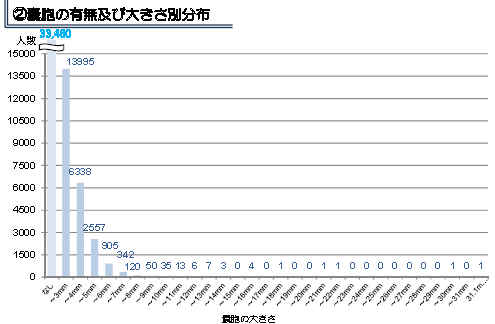 ● Difference by gender was barely seen up to 3.0 mm and over 10.1 mm, but the incidence in girls tended to be higher in sizes between 3.1 mm and 10.0 mm.
Difference by age groups showed cysts up to 3.0 mm were seen most frequently in the age 6-10 group, with incidence gradually decreasing with increasing age. 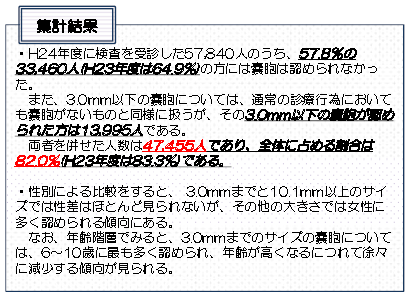 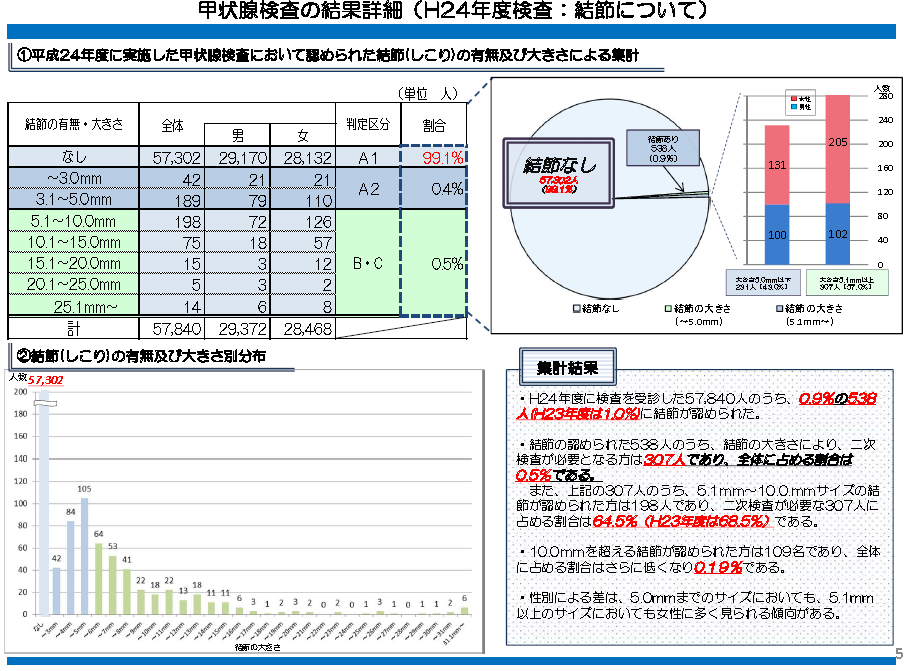 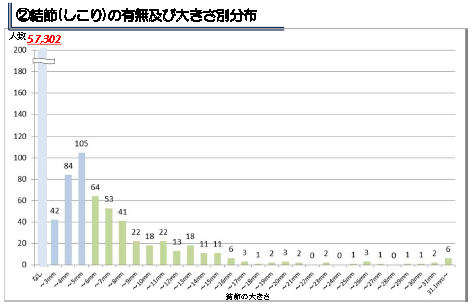 ●Difference by gender showed a tendency for more girls in both nodules up to 5.0 mm and larger than 5.1 mm. 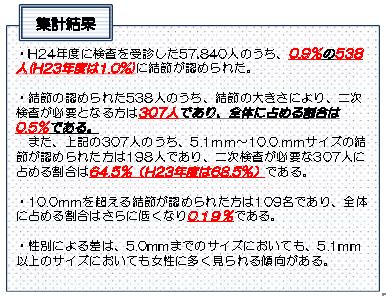 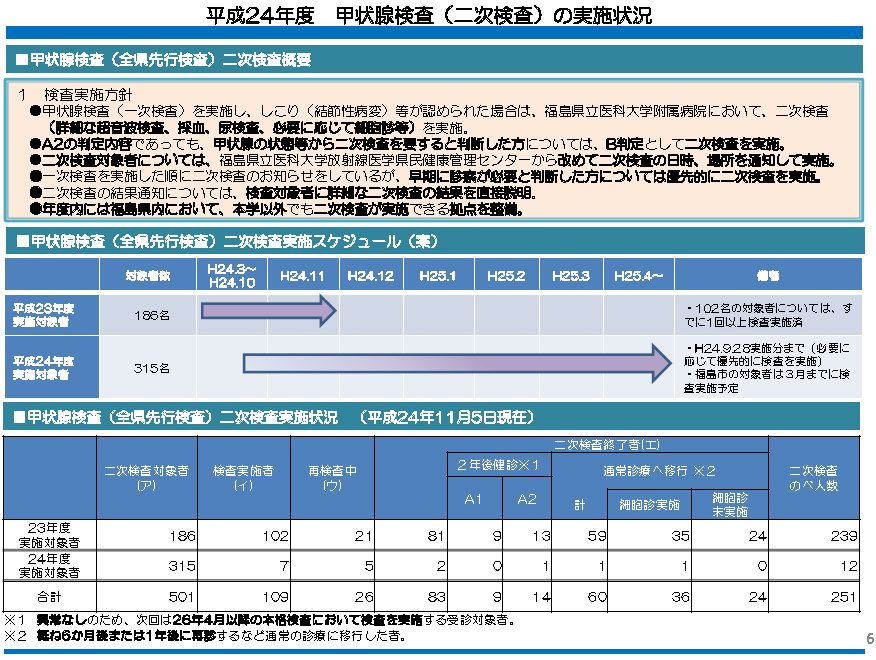 FYH23 examination: 186 qualified.
Conducted from March 2012 to the end of November 2012.
102 already had more than one examination.
FYH24 examination: 315 qualified.
Currently being conducted.
Includes those who completed the primary examination by September
28, 2012.  (Priorities are given as needed).
Fukushima-city residents will have the secondary examination
implemented before March 2013.