Letter from Oguni Elementary School It's Okay: Hotspot Down from 179 μSv/h to 3.9 μSv/h

There is a letter sent home on September 18, 2012, from Oguni Elementary School in Date-city, Fukushima, in order to notify parents/guardians of the radiation contamination situation at school.  It can be found in the links below.

Date-city is located about 50 km northwest of Fukushima Dai-ichi nuclear power plant: it sits east of Fukushima-city and known to have high radiation levels.  Oguni Elementary School is indicated as “A” in the map below.

Information about Date-city can be found here: 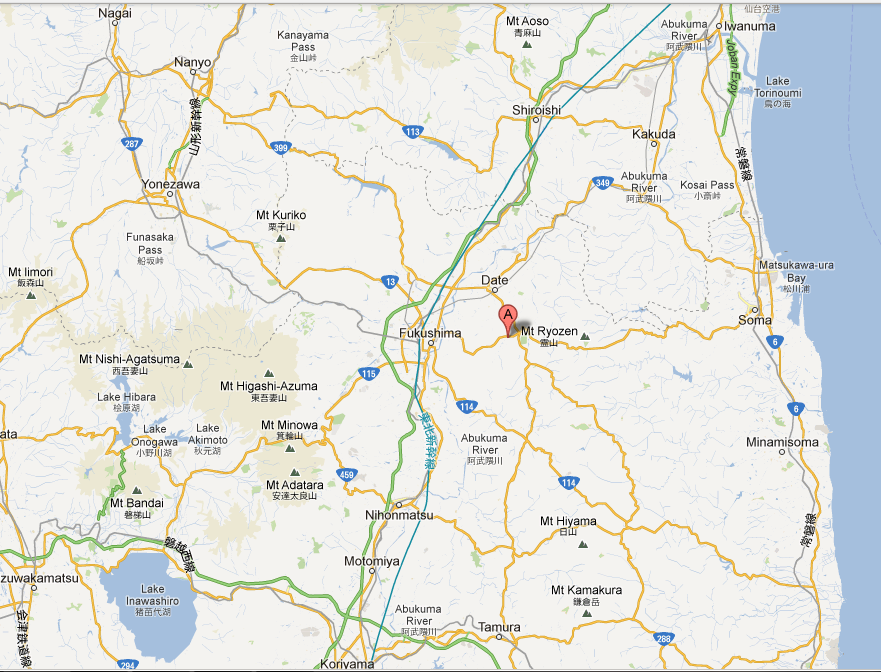 Complete translation of the letter is as below.

In regards to the radiation contamination situation surrounding the school

It has been nearly a month since the second trimester began.  Despite the persistent late summer heat, children are back into the regular daily routine, spending a calm school life.
I would like to report to you the latest radiation situation surrounding the school.

“Ambient radiation level monitoring survey of the area ‘A’ elementary and junior high schools” was conducted on Tuesday, August 21, 2012.  I have asked the person in charge to send the survey results to us through the Board of Education, but we have not received it yet.  When we checked with the person in charge today, I was told, “We will organize the data and deliver it to school.”  We will let you know as soon as we receive it.

2. Regarding the confirmation of hot spots around the school and the response
(1) Survey and response by CRMS (Citizen’s Radioactivity Measuring Station)
From 1:00 pm to 4:00 pm on Sunday, July 8, 2012, members of “Association for Recovering Clean Oguni from Radiation” as well as PTA conducted a radiation level survey around the school.
The survey result confirmed the effectiveness of decontamination of the schoolyard.  However, multiple hot spots were identified:  from the school bus stop to the main gate; edges as well as south and east sides of the schoolyard; around the swimming pool; and behind the gymnasium.
In regards to these hot spots, they stuck bamboo sticks with red vinyl tape wrapped around them there in order to secure safety of the areas.  we called the students' attention not to go near the area.

(2) Investigation and response by the Board of Education, Department of Education,  School Educational Facilities Section
On Wednesday, September 12, 2012, the School Educational Facilities Section investigated a hot spot located at a drain a ditch outside the school property near the sundial on the east side of the school building.  (This area is covered by weeds and usually the students stay away from it).
The next day, several workers came to school to remove soil from the drain and sand from the gutter and cover the area with sand stored in the corner of the schoolyard.  The ambient radiation level went from 179 μSv/h (prior to decontamination) down to 3.9 μSv/h (after decontamination).  The hot spot has a locally high radiation level due to the accumulation of mud and sand from the gutter.  Exposure to a high radiation level can be prevented if you stay far away from the hot spot location.
In regards to the hot spot, we put up a “No Entry” sign there in order to secure safety of the area.  In addition, we called the students' attention not to go near the area.
In the future, we would like to keep checking the radiation levels around the school and take appropriate measures.  The school will continue to release the information, but if there is any other information available locally, please let us know. 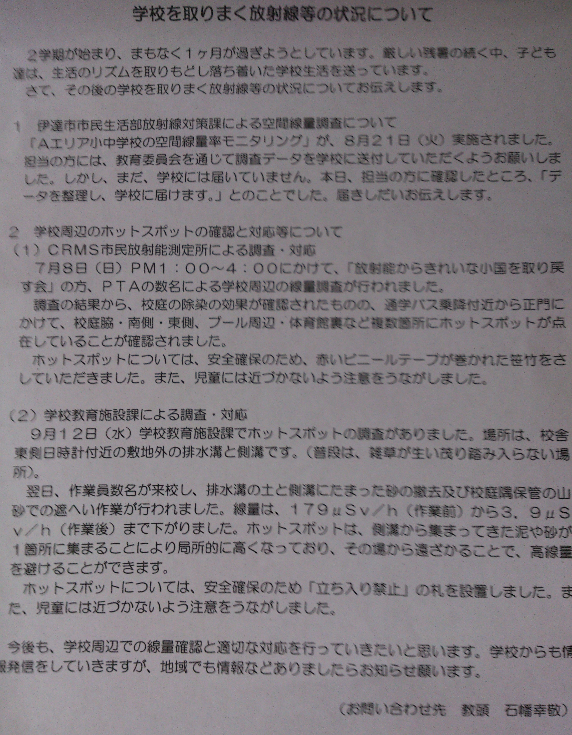 ＊＊＊
Based on the map of Date City’s simultaneous radiation levels surveyed between July 26 through 28, 2012, Oguni Elementary School is located in the grid number J-17, which is circled in red.  The coloring of this grid indicates that the ambient radiation level is between 1.01 μSv/h and 1.25 μSv/h. 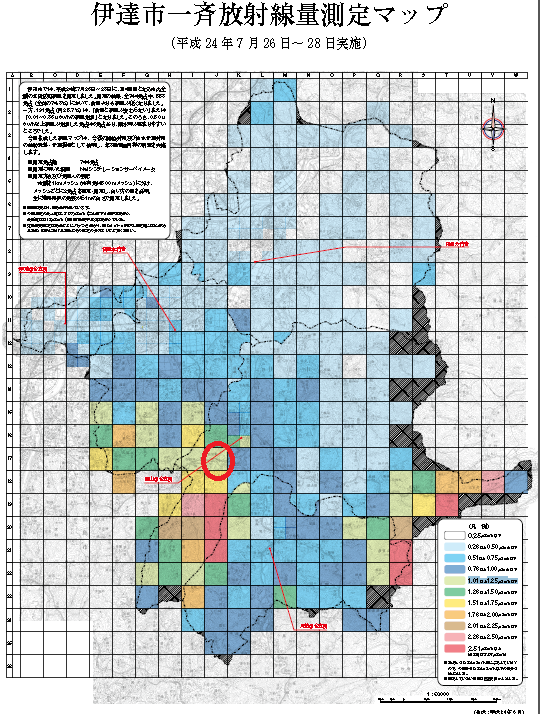 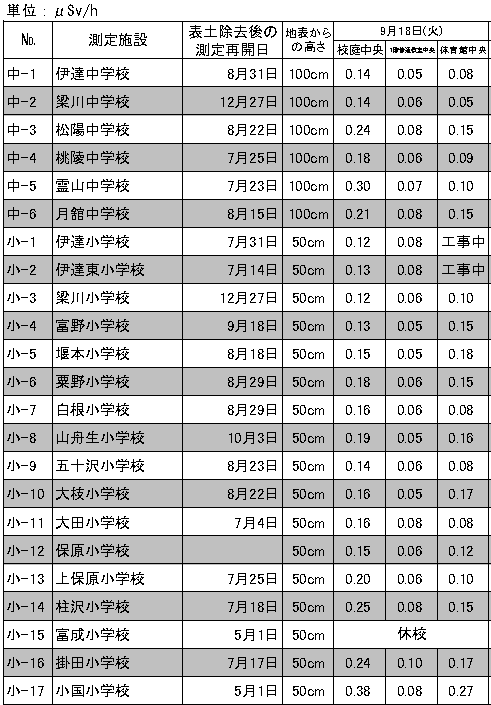 August 21, 2012 results: Oguni Elementary School is on the bottom. 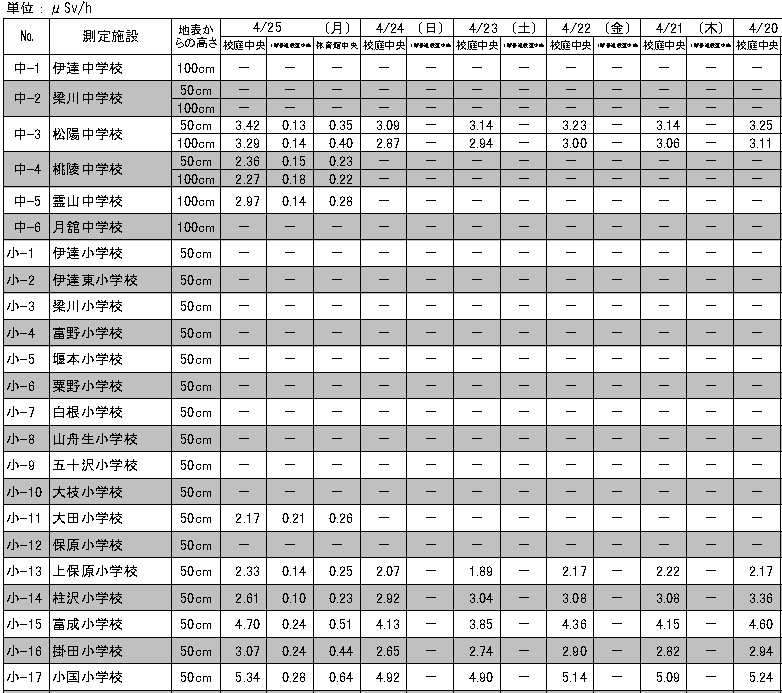 Oguni Elementary School officials seem content with the post-decontamination radiation level of 3.9 μSv/h.  It is certainly much, much lower than the unbelievable 179 μSv/h.  However, it is still too high for anybody, let alone children, to be around.