As you can imagine, many Japanese people are worried and anxious about whether they and their children were indeed exposed to radiation as a result of the Fukushima Dai-ichi nuclear accident in March 2011.

Towards the end of 2011, people were beginning to talk about “uranium” detected in them and/or their children.  Actually it was the nail mineral analysis that they were talking about, offered by some clinics such as this. (link)

Nail analysis results in a 4-year-old 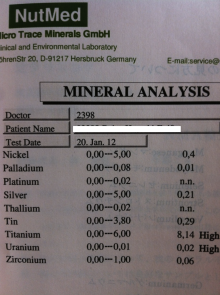 Reactions of those whose children’s nail mineral analysis results showed “higher than normal” uranium were, needless to say, an emotional turmoil--a mixture of shock, despair, worries, and anger.

Unsure about the validity of using the nail mineral analysis, even as an indirect sign of radiation exposure, we decided to contact the German analytical company, Micro Trace Minerals, which some Japanese clinics were sending the samples to for analysis.  www.microtraceminerals.com

E-mail exchanges with the research director of Micro Trace Minerals, a clinical metal toxicologist Dr. E. Blaurock-Busch, are shown below.

The bottom line was that neither nail analysis nor hair analysis, offered by this company,could be a certain sign of radiation exposure.  Dr. Blaurock-Busch was knowledgeable and responded to our questions fully and with kindness.  The company seemed to offer excellent services in diagnostic analysis of heavy metal toxicity.  Her suggestion to look for local labs for urine testing of specific isotopes, despite the availability of their own urine testing, seemed reasonable.  However, her advice to contact Poison Control Center or EPA for radiation tests affordable and available to physicians seemed a bit odd, suggesting she was not familiar with the field of radiation testing too well.  (However, the US system might be a total mystery to those outside the US.)

Some Japanese people had been doing the nail mineral analysis even before the Fukushima Dai-ichi nuclear accident.  In that case they had a pre-accident baseline to go by.  Some noticed changes in their post-accident analysis.  It might not be absolutely clear that the change was from radiation exposure, yet it could still be a useful piece of information for the specific individual.

However, physicians should pursue tests that would give people a more definite answer for radiation exposure, rather than analysis that might “only suggest the possibility” of radiation exposure, especially when a huge emotional toll is at stake.  Radiation exposure is quickly becoming part of everyday life in Japan, but it is still a serious issue to acknowledge as one’s own, considering the prejudice endured by the atomic bomb survivors.  It might be human nature to want a quick and relatively affordable tests, possibly to deny the fact that they or their children might have been exposed to radiation.  Nevertheless, it does not seem ethical to offer nail mineral analysis, known to be incapable of distinguishing radioactive isotopes from nonradioactive isotopes, for a serious issue such as radiation exposure.

I am a Japanese physician residing in the United States.
I am curious about how to test the body for radiation contamination. What do you recommend?

I have seen hair and nail analysis used for the sign of radiation contamination. Do you provide such analysis?

We test potentially radioactive elements such as cesium, strontium, iodine etc in hair or nails. I have to point out that we do not distinguish between the natural and the radioactive isotopes of an element such as strontium or uranium, for instance. We test the total number of isotopes.

Attached is a hair and a nail sample report.
Hair http://microtraceminerals.com/fileadmin/uploads/pdf/en/2012-05-05_Sample-Patient_1H120001.pdf
Nail http://microtraceminerals.com/fileadmin/uploads/pdf/en/2012-05-05_Sample-Patient_1N120002.pdf
We consider this our extended profile (P10).  For pricing, please check our web site. The laboratory catalog (brochure) can be downloaded or viewed.
If you need further information, please let me know .

Thank you for your quick reply.

What you are saying is that nail and hair analysis do not provide confirmation of radiation exposure?
"Potentially radioactive elements" do not necessarily mean exposure to radiation from a nuclear accident, or do they?

May 15, 2012
Then, can I ethically offer nail and hair analysis to my patients who are worried about their radiation exposure?

This is difficult to answer.
When it comes to cesium or europium, for instance, we should not see any of the isotopes.
When we are looking at uranium, strontium, or iodine for instance, we do not know the source. This is where a good case history is important.
If you would, for instance, locate an unusually high uranium level in hair or nails, and the patient does not live in an area where natural uranium is present in an unusual amount, then we must inquire regarding the source. We must also realize that natural uranium does contain some radioactive uranium.
If we suspect radiation exposure we can do specific isotope testing.
If we would locate radioactive uranium in an usual amount than the question arises of what to do.
Honestly, we do not have good answers for that one.

In summary, it is not an ethical question so much as a question of priority. Around Fukushima, the people who have been exposed will have experienced radioactive exposure. Most likely, we will not detect radioactive iodine any longer, but cesium would still be detectable. In such a person, you may immediately do the expensive testing for specific radioactive isotopes, or start with inexpensive tests. Still the questions arises of what to do.

I would say the best you can do is support general health by normalizing biochemistry and removing those toxins that are contributing to an additional burden. For instance, when a patient has a healthy calcium metabolism, strontium and lead are better balanced.

Lead is a breakdown product of uranium. We can aim to remove that, esp when we know that the patient has a high body burden of the nonradioactive elements.

It’s all a matter of balance.
I hope you agree.

May 31, 2012
Hello.  I am still waiting to hear from you about what you might offer for radiation testing.

May 31, 2012
For specific radioactive isotope testing, Gamma Spectroscopy could be used, however for that test we need lots of material. Urine testing could be done, but we would need 3l.

For simple reasons, you would need to work with a local laboratory.

May 31, 2012
I see. 3L is a LOT of urine!
So nail testing is not really a good indicator of radiation contamination compared to urine testing, isn't it?

Hair and nail might be the best specimen for testing past exposure to toxic metals. In the case of cesium, we can safely assume that it is not normally found in humans. If we find cesium, we are alerted. We can then check patient history in more details and then decide what further tests or treatment is needed.

When it comes to radioactivity, we have limited diagnostic means that are affordable and available to physicians other than toxicologists. You may check with poison centers or EPA. More about metal toxicity including radioactive metals can be found under https://www.smashwords.com/books/view/156817.